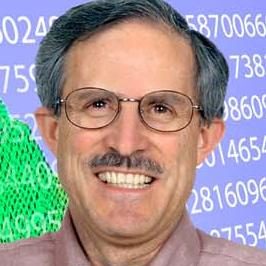 David H. Bailey graduated from Brigham Young University in 1972 with a B.S. in mathematics. He then enrolled in the graduate mathematics program at Stanford University, where he received his Ph.D. in 1976.

From 1976 until 1984, Dr. Bailey worked as an applied mathematician with the Department of Defense, near Washington, D.C., with ESL Inc. of Sunnyvale, California, and then with SRI International in Menlo Park, California. In 1984, Dr. Bailey joined the Numerical Aerodynamic Simulation (NAS) program at NASA Ames Research Center, where he has been ever since.

In 1986 Dr. Bailey, searching for strenuous hardware diagnostic for a new Cray-2 supercomputer, wrote a program to compute the mathematical constant pi to high precision, using a new algorithm discovered in 1985 by J. Borwein of Canada. Although his Cray-2 computations of pi were soon outdistanced by others, the software Bailey developed for performing multiple precision arithmetic is now used by scientists world-wide for research in both pure and applied mathematics.

Bailey found that one key to fast multiple-precision computation is the same as the key to many important fluid dynamics computations: an efficient scheme to perform the fast Fourier transform (FFT) on advanced computer architecture. Techniques that he subsequently developed with Paul Swarztrauber of NCAR are now the basis of FFT routines available on supercomputers from Cray and other vendors.  Along this line, in 1988 Bailey demonstrated that Strassen’s algorithm, long considered only an academic curiosity, could be used to realize significant savings for practical matrix multiplication. Now most computer vendors provide Strassen-based matrix routine in their scientific libraries.

Dr. Bailey has also been quiet active in the area of supercomputer benchmarking. In 1984 he developed the “NAS Kernels,” which were later incorporated into the SPEC suite. Then in 1991 he and several colleagues at Ames developed the “NAS Parallel Benchmarks.” Performance results on this suite are now widely cited in the parallel computing community. Bailey’s essay “Twelve Ways to Fool the Masses” is often cited by scientists when discussing questionable parallel performance reports.